Were you a BMO Bank of Montreal Mortgage customer?

Caveat! I am in business to make money by selling financial knowledge (seminars) and mortgage amortization software that will also calculate correct prepayment penalties (IRDcalculator). My software will give you peace of mind ensuring that prepayment fees are calculated correctly.

Banks are in business to make a profit by lending you money and charging interest for the use of their money. I have no problem with that concept. What I do have a problem with is some Banks calculate the prepayment “penalty” to terminate your mortgage term in their favour, by using the greater of the 3 month interest penalty or the IRD (Interest Rate Differential). It was refreshing to read a recent newspaper advertisement to see a large Canadian Bank admit to making errors in their calculations of prepayment penalties and willing to reimburse borrowers. 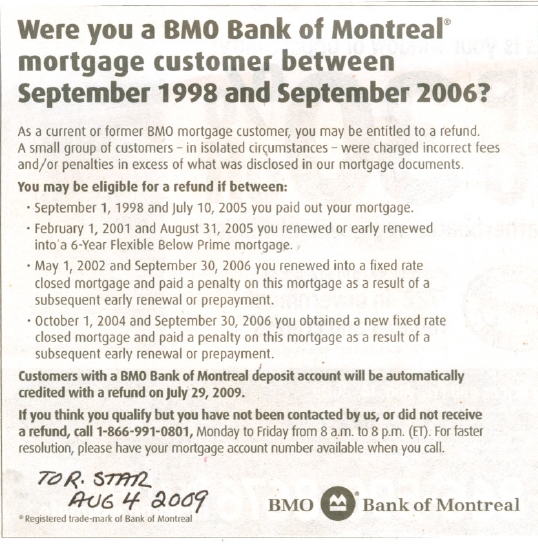 A mortgage is a contract. Banks usually tie your mortgage payments to a pool of money based on Bonds or some form of guaranteed investment certificates. If you want out of your mortgage term contract in Canada (before it expires) in order to pay a lower interest rate someone else has to get a lower interest rate on their money. In simple terms if you win someone must lose. The only fair method for all concerned is for you to pay the bank an Interest Rate Differential (IRD) to exit your mortgage.

If a Bank calculates the correct IRD they receive an equivalent amount of interest now instead of later. The IRD is based upon present value future value calculations that have been around since Fibonacci developed the algebraic equation in 1202 AD(in his famous Book of Calculations). Personal computers today are household items and my amortization.com software has been available since 1984, enabling one to calculate the IRD. It’s ironic that even in March of 2000 some Canadian Banks were still reluctant to provide a borrower an IRD calculation. Instead the Canadian Bankers Association released a 13 page booklet that gave a tedious procedure to calculate an approximate IRD. If you wanted the accurate IRD algebraic equation you have to request it.

This “which ever is greater” concept is proof positive of the unethical nature of the situation, yet the Canadian Bankers Association justifies its implementation! The amount of the “penalty” should be the IRD, not a penny more! The bank is entitled to its interest equivalent and the borrower is entitled to the correct IRD fee to break a contract. This is just common sense!