Banks are a necessity for any civilized way of commerce in today’s society. Obviously Banks are in business to make money by lending out money. Whether you call that profit, fees, interest or your cost of borrowing is a matter of semantics. In ancient times when expeditions left on ships to search for treasures across the seas someone on land had to pay for the trip in advance. These risk takers who provided the money for the voyages expected to get a return on their investment, and end up with more money than they handed out in advance.

If Banks did exactly what they were supposed to do, lend money and charge fair fees perhaps less Canadians would indulge in the national pastime of criticizing Banks. Perhaps then Banks would spend less of our money that we give to them in profits
on public relations such as planting trees and community events.

The standard model for an investment concerning your mortgage payments is an ideal calculation where the payment and interest (or growth) is reinvested each month as it is received from the borrower. This is an ideal situation because it is impossible to take every single mortgage payment from every borrower in the country and lend it out again at the exact interest rate they are being charged. It is a bench mark calculation and if everyone follows the same rules it’s a standard method of comparing financial products. In legal circles it is called deemed reinvestment. If you borrow money in Canada for a mortgage at a nominal rate of 12% (as printed in the newspapers) then the lender receives an effective interest rate (EIR) of 12.36% at the end of the year because of deemed reinvestment. I mention this EIR because there are some financial luddites who always seem to dwell on this issue because they do not understand financial terminology.

Assume you took out a mortgage for $413,000 and the nominal rate was posted in the newspaper as 6.45% for the selected term. Your Bank assures you that because you’re a valued customer they will give you a discounted interest rate of 5.1% for the term instead of the 6.45%. In the middle of term you decide you want to terminate your term agreement in order to take advantage of lower interest rates. You have 30 months remaining in your term and the closest rate the Bank can offer is a 3 year term rate of 4.15%.

You ask them to calculate the interest rate differential (IRD) because you want to take advantage of a current 2.35% variable rate mortgage and they oblige. However, instead of using the 5.1% to 4.15% they use the 6.45% to 4.15% in the IRD calculation. The ideal investment calculation would obviously imply that your payments where being reinvested each month at 5.1% so why is the Bank using the 6.45% calculation? This is the sixty four thousand dollar question. More correctly it’s the $13,732 question. The $13,732 is the extra profit, interest, money or fees the Bank makes because of the banks decision to use the higher rate of 6.45% for the IRD. 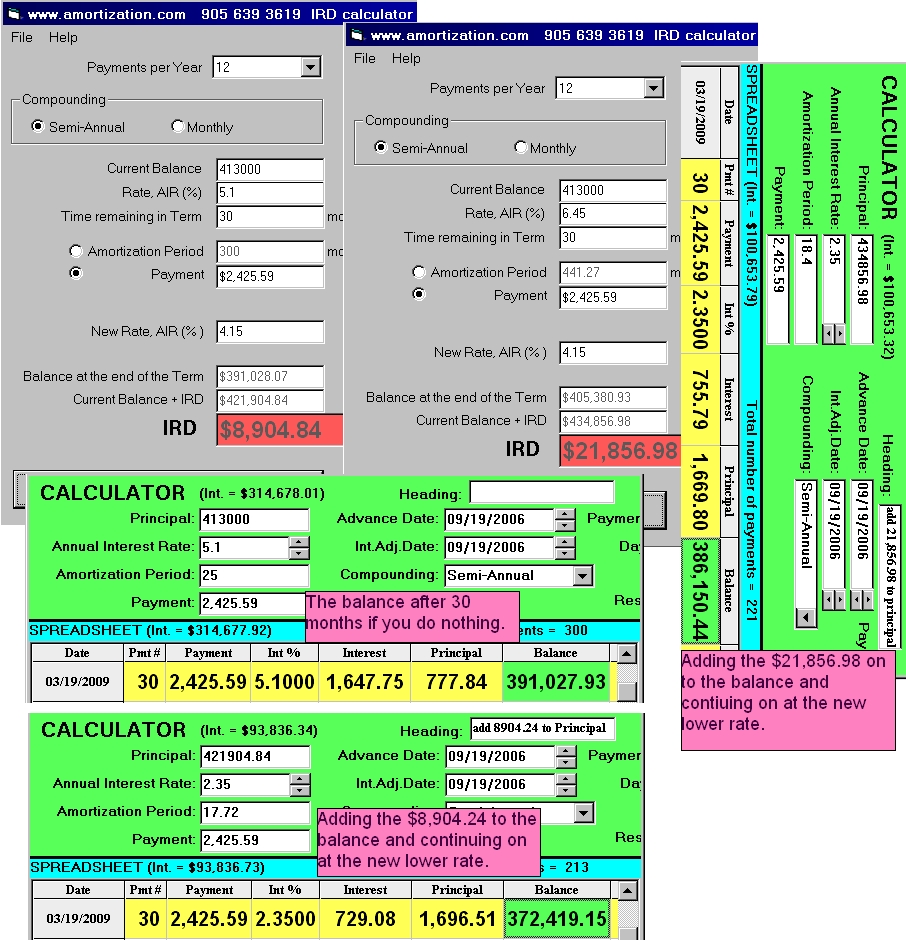 Here are the facts!

No matter which IRD calculation is used you would be saving money because of the 2.35% rate, not because you paid the IRD.

The difference in savings to you is $13,731. There is a lesson to be learned. Always read the squint print in the mortgage documents before signing. I would bet the farm that some banks have a clause in the fine print of the mortgage documents stating that you agree to pay the IRD based upon the posted rate even though they allowed you to pay the discounted rate. I could be wrong!